How do you like your hot cross buns? For us, it's toasted, buttered and eaten with a cup of tea - delicious!

Fluffy, juicy with sultanas, gently spiced and sticky with apricot jam, this recipe from Head Chef Nicolas at The Welldiggers Arms is a must-try!

And if you don't like sultanas, why not switch in chocolate chips? 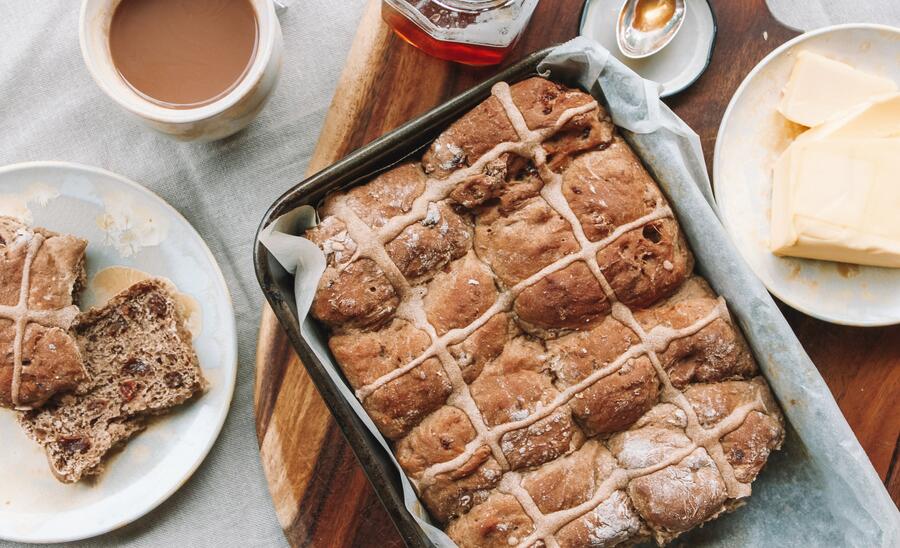 Bring 300ml full-fat milk to the boil, then remove from the heat and add 50g butter. Leave to cool until it reaches hand temperature. Put 500g strong bread flour, 1 tsp salt, 75g caster sugar and 7g sachet fast-action or easy-blend yeast into a bowl. Make a well in the centre. Pour in the warm milk and butter mixture, then add 1 beaten egg. Using a wooden spoon, mix well, then bring everything together with your hands until you have a sticky dough.

Tip on to a lightly floured surface and knead by holding the dough with one hand and stretching it with the heal of the other hand, then folding it back on itself. Repeat for 5 mins until smooth and elastic. Put the dough in a lightly oiled bowl. Cover with oiled cling film and leave to rise in a warm place for 1 hr or until doubled in size and a finger pressed into it leaves a dent.

With the dough still in the bowl, tip in 75g sultanas, 50g mixed peel, zest of 1 orange, 1 finely chopped apple and 1 tsp ground cinnamon. Knead into the dough, making sure everything is well distributed. Leave to rise for 1 hr more, or until doubled in size, again covered by some well-oiled cling film to stop the dough getting a crust.

Divide the dough into 15 even pieces (about 75g per piece). Roll each piece into a smooth ball on a lightly floured work surface. Arrange the buns on one or two baking trays lined with parchment, leaving enough space for the dough to expand. Cover (but don't wrap) with more oiled cling film, or a clean tea towel, then set aside to prove for 1 hr more.

Heat oven to 220C/200C fan/gas 7. Mix 75g plain flour with about 5 tbsp water to make the paste for the cross - add the water 1 tbsp at a time, so you add just enough for a thick paste. Spoon into a piping bag with a small nozzle. Pipe a line along each row of buns, then repeat in the other direction to create crosses. Bake for 20 mins on the middle shelf of the oven, until golden brown.

Gently heat 3 tbsp apricot jam to melt, then sieve to get rid of any chunks. While the jam is still warm, brush over the top of the warm buns and leave to cool.

This 300-year-old countryside inn, perched on the outskirts of the pretty West Sussex town of Petworth, overlooks the rolling hills of the South Downs National Park. The great British countryside is at the heart of this pub and the team has worked hard to incorporate the natural environment and the building's history into the stylish yet comfortable interior.

More recipes for you to enjoy