Run with charm and dedication by James Pullan, the 16th-century Griffin Inn at Fletching is the real deal - a proper Sussex bolthole with a traditional interior, packed with wooden beams, oak panels and real log fires - four in total - and nary a straight line in sight.

Local ales feature on the pumps and local produce is championed on the menu in the bar; plus there's a classically stylish restaurant and everything from the impressive wine list to the refined culinary output show commitment to quality. The 13 bedrooms have personality and country charm in abundance with four-poster beds and cast iron baths.

The garden is the jewel in The Griffin's crown. The grassy green space looks out over glorious Sussex countryside, and there are plenty of tables on which to nurse a pint or tuck into something tasty from the bar menu while you soak up the view across the 'Sussex Serengeti'. And when the barbecue season arrives, the garden fills up with enthusiastic punters at weekends for chargrilled meats, pizzas from the wood-fired oven, high-day hog roasts, and live jazz.

Quiet romance
Bag a table on the paved terrace and enjoy a candlelit alfresco dinner for two.

Dog-friendly
Dogs can be accommodated in the bedrooms if you bring a basket or rug.

Outdoor adventures
There's fabulous walking to explore in these parts - whether it's the Ouse Valey Viaduct or Ashdown Forest, the home of Winnie the Pooh.

There are thirteen bedrooms at The Griffin - four in the main part of the building, four in the coach house overlooking the garden, and five in Griffin House next door. And they have one thing in common - they're all different.

There's no sense of physical separation wherever you stay, with the bar never more than a short a stroll away. Each room has an individual style with period features, original pieces of furniture, interesting artwork, quirky touches such as porthole mirrors, and colourful fabrics, while the en suite bathrooms have either showers or cast iron bathtubs.

If you're up for something a little funky, check out the in-room shower in the Sheffield Room, while romantics will be pleased to know there are four-poster beds in over half of the rooms.

The kitchen team have a fabulous two-acre market garden just down the road at their disposal, providing salads, vegetables and soft fruits. Whether you opt for the bar or restaurant menu, there's a refinement to the culinary output whichever you choose.

It's really down to whether you fancy hunkering down at a wooden table in one of the charmingly rustic bar areas or opt for a little more refinement in the restaurant, where white linen and table service set the tone. Seasonal menus offer big-flavoured Mediterranean-style dishes alongside well-cooked pub classics - perhaps tomato and olive squid stew; pork belly porchetta, chicken liver, sage and black pudding stuffing and spiced butternut puree; baked egg custard tart, lemon sorbet and lavender syrup.

Out in the garden, there's a wood-fired oven for relaxed summer dining and the Sunday summer barbecues are legendary - roll up and tuck into delicious beef and thyme burgers, Romney Marsh lamb chops and Newhaven mackerel. The wine list is top drawer offering a good selection by the glass and wines of the month. Italy is a particular favourite - check out the heavyweight Borolo on the Connoisseur's section of the list. 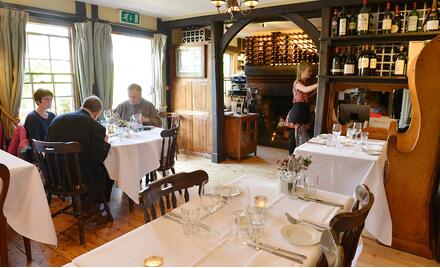 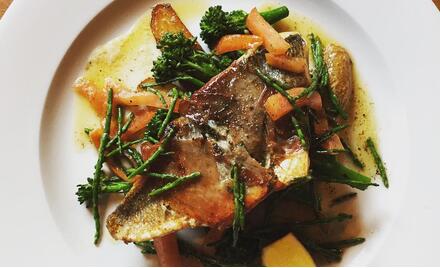 There's plenty going on at The Griffin itself with live music bringing a buzz to Friday evenings and Saturdays. There's a wine club with special dinners and trips to top European wine regions, and the pub is also home to The Griffin Cricket Club, as various photos and pieces of memorabilia around the place attest.

With fabulous views of the Ouse Valley, a walk to the Ouse Valley Viaduct - which carries the London-Brighton Railway Line over the River Ouse in Sussex - is well worth the hike. Close to Haywards Heath, the viaduct is known for its ornate and elegant design.

Literary lovers shouldn't miss Charlston Farmhouse in Firle, half an hour's drive away from The Griffin. The former rural haven of the literary set, Virginia Woolf spotted this remote settlement on the South Downs while out walking one day in 1916 and Charleston became the home and country meeting place for the writers and artists of the Bloomsbury group. The Bloomsbury artists painted furniture, ceramics, and murals, which can be seen at the house from March to November, along with a collection of paintings by Picasso, Derain, Sickert and Delacroix.

To make a booking enquiry, please use the form below or you can call our reservations team on 020 8161 0100. Our phone lines are open Monday, Tuesday, Thursday and Friday, 11am - 3pm.