Pub with rooms in Hindon, Wiltshire

Ethan Davids's handsome former coaching inn dates from the 1700s and stands opposite the church in Hindon, a beautiful Georgian village in the most rural part of Wiltshire. It's just a mile from the A303 and provides a haven for road-weary travellers in search of good food and a comfortable night's rest.

Set around an enclosed courtyard, the inn has undergone extensive and sympathetic refurbishment over the years and Ethan has spruced up the bar and dining room and upgraded the rooms since arriving in November 2019.

A warm welcome awaits in the classic, stone-flagged bar, where a log fire burns in the huge brick fireplace, and the rustic-smart adjoining dining rooms. Here you'll find rugs on wooden floors, an eclectic mix of old dining tables and chairs, the odd pew bench and glass-laden dresser, and warm hues and interesting paintings on the walls. The glow of evening candlight enhances the cosy atmosphere and draws you in on cold winter nights.

Just minutes off the A303 and two-hours (on a good day) from London, the Grosvenor Arms makes the ideal stop-over en route to Devon and Cornwall, esepcially if escaping the capital on a Friday evening.

A touch of culture

Visit the renowned National Trust gardens at nearby Stourhead. They are among the finest in the country and the lakes, which date from 1448, temples, shrubs and rare trees are best seen in autumn for the amazing colours.

The nine rooms are split between the main inn and the courtyard rooms, with six tucked away under the eaves upstairs; a couple enjoy village views.

Owner Ethan has upgraded the rooms, sourcing individual pieces of furniture to fit the period of the inn, notably Room 5, which features original wall panelling and a fine period fireplace with original range. Room 1 has a big comfortable bed (topped with quality linen and down) and a huge tiled bathroom with bath and separate walk-in shower. Added touches include decent lamps interesting artwork, digital radios, fresh coffee, and local Fern eco-toiletries. A few rooms have three beds and are ideal for family stays. Refurbishment of all rooms was completed in 2021.

The excellent breakfast will set you up for a day exploring this unspoilt area of Wiltshire - walkers should seek out the foothpaths through the beautiful Nadder and Ebble Valleys and surrounding downland. 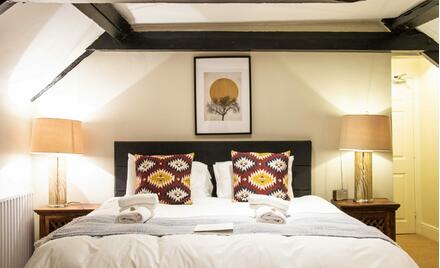 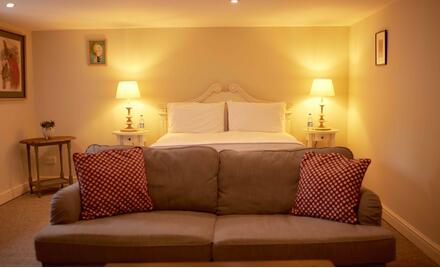 Food takes centre stage at the pub and the kitchen delivers fresh, honestly prepared dishes with bags of flavour on a short daily menu that evolves with the seasons.

The food is pitched perfectly for the informal surroundings and makes sound use of locally sourced ingredients, including venison, pheasant and partridge from the Fonthill Estate, and fine cheeses and charcuterie from La Chasse in Zeals.

To quaff, there's a short interesting list of wines (7 by the glass) from local merchant Gardner & Beedle and Butcombe beers on tap. 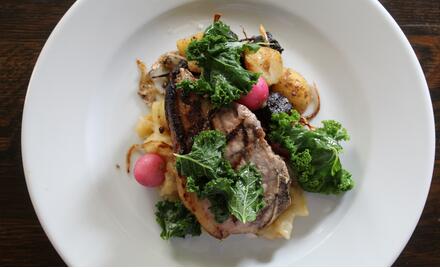 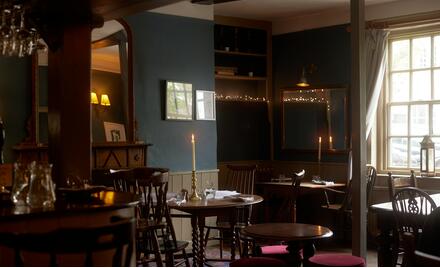 With its atmospheric ruins and romantic lakeside setting, Old Wardour Castle is without question one of the region's must-see visitor attractions. Fans of the 1991 film Robin Hood: Prince of Thieves, starring Kevin Costner, will immediately recognise it as Locksley Castle, Robin's family home. Located on the northern edge of Cranborne Chase, the castle dates back to 1393 and is noted for its hexagonal tower house.

Home of the Earls of Pembroke, Wilton House was designed by Inigo Jones in the 17th century, replacing the original house, which was destroyed by fire, and later remodelled by James Wyatt. Inside is the Double Cube Room, which contains a famous collection of Van Dyck paintings. Look out, too, for the former riding school, a Tudor kitchen and a Victorian laundry.

Salisbury Cathedral's soaring spire is the tallest in the country, immortalised in John Constable's famous painting Salisbury Cathedral from the Meadows, painted in 1831. The cathedral was begun in 1220, finished about 1280, and includes a medieval frieze and an original copy of the Magna Carta. From every perspective, the cathedral is a breathtaking reminder of the skill of those who built it nearly 800 years ago.