Pub with rooms in Ramsbottom, Lancashire

Set on the edge of leafy Ramsbottom, this unassuming old stone pub has been given a stylish makeover - step inside to find a fabulous light-filled bar and Orangery, boasting long views over the rooftops to Holcombe Moor.

The inn has been stylishly refurbished with a great eye for detail; the spacious bar has comfortable padded booths lit by huge glass globes, flagstone floor and woodburning stoves, whilst the airy dining area sports floor to ceiling windows and chic monochrome harlequin floor tiles. The cosy 'snug' is a terrific spot to bag if you fancy a game of dominoes or scrabble with your pint of locally brewed ale.

On a sunny day, head for the huge garden, where you'll find a chicken run, a play space for kids and the 'Incredible Edible' small-holding where vegetables, leaves and herbs are grown. The inn is passionate about community regeneration and has a commitment to employing disadvantaged young locals. The pub also hosts family parties and wine dinners throughout the year.

No car needed
A one-minute taxi drive or a 10-minute walk from the local station, visitors can easily explore Ramsbottom by foot.

Outdoor adventure
There's fantastic walking through the rugged Pennines - choose from the Forest of Bowland or the 9km Tolkein Trail at Hurst Green. ​

Five contemporary-boutique bedrooms are designed with a carefully considered owl theme - choose between Eagle, Tawny, Barn, Long-eared and Little Owl. A huge amount of effort and creativity has been given to each room and many are filled with bespoke murals and artwork.

Barn Owl is a perfect choice in wintry weather with a gorgeous exposed stone chimney breast and a woodburning stove. The rooms at the rear (Tawny Owl & Barn Owl) have Juliet balconies overlooking the grassed roof of the Orangery with stunning views across the Rossendale Valley to the rolling hills beyond. Dogs are allowed to stay in Eagle Owl.

There's a classy espresso maker in each room along with homemade cookies, playing cards and dominoes and a jar of Bombay Mix. Bathrooms are modern and luxurious, one with beautiful Moroccan tiles, another with an extraordinary back-lit panel, made exclusively, and the monsoon shower glass is etched with - you guessed it - an Eagle + Child! 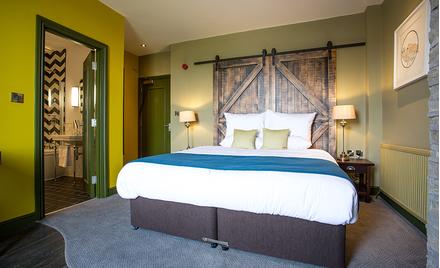 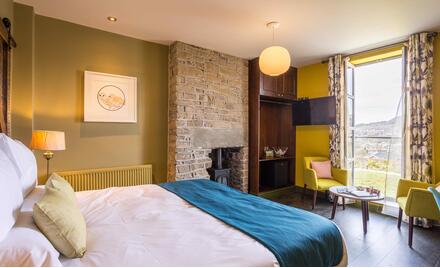 There's a distinctly local Lancashire accent to the menu and the kitchen makes good use of local growers and suppliers - Forest of Bowland venison, Morecambe Bay crab cake, and fresh herbs and vegetables from the pub's 'Incredible, Edible Garden'.

Pub classics are given a twist - the humble scotch egg morphs into a Manchester Egg with Bury black pudding and a pickled quails egg. Similarly, try the satisfying 'Double Bomber' pie made with Lancashire Bomb cheese and Thwaites braised onions. 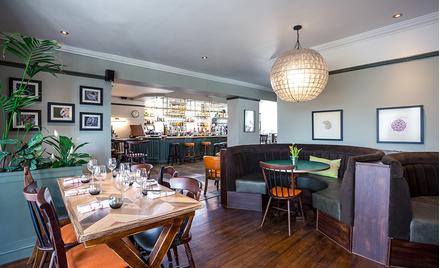 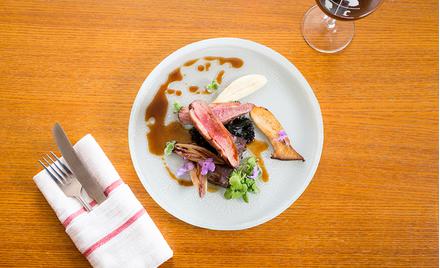 The extraordinary Bury Market has been around since the 1500s and is widely believed to be one of the best in the country. You'll find a bewildering array of produce from tripe to tomatoes; there aren't too many places where you can buy ducks' eggs, Goosnargh chicken, Morecambe Bay shrimps, Bury black pudding, and Cheshire gooseberries in a few yards of each other. For those coming from Ramsbottom, catch the East Lancashire steam train from Ramsbottom to Bury, it's a proper treat. Just don't forget to take a big cool box for your purchases!

For a little injection of history, head to Gawthorpe Hall. Sir Charles Barry, who designed London's Palace of Westminster, was responsible for the striking interiors of this imposing house outside Burnley. Gawthorpe Hall was once home to the Kay-Shuttleworth family, influential figures in the local textile industry. There are paintings here on loan from the National Portrait Gallery, so it's worth the visit.

The rugged grandeur of the nearby Forest of Bowland is a spectacular part of Britain's Pennine landscape. The forest is characterised by steep-sided valleys and tracts of heather-covered grouse moor. In addition to gentler routes and family rambles, there are several long-distance trails to enjoy - including the Ribble Way and the Pendle Way.